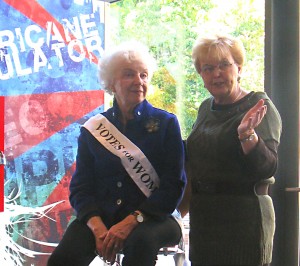 Governor Kunin was in Portland this past week to speak about her most recent book, The New Feminist Agenda.  Looking back, she said, the women’s movement made some progress but not as much she expected.  Women still earn less than men, only 17 percent of the Congressional seats are held by women (putting the US in 68th place in the world in terms of the percentage of women in the national legislature), and only 3 percent of CEOs are women.  And, she added, it has not gotten any easier for women (and men) to balance family and career; high quality affordable child care is not as readily available as it should be. We lag behind other developed countries in terms of paid family leave. While some companies offer employees flexibility in their work schedules, most do not; this flexibility is essential for working parents to manage their multiple responsibilities. She also spoke about the rising percentage of children living in poverty in this country–again, much higher than many other developed nations and emphasized the need for policies that make investment in children, especially in programs targeted at early childhood.

To make change, people need to get active. Asking us to imagine a powerpoint with three boxes, she described the three things that enable people to become active.

One is anger about something. The second is a combination of imagination (the ability to see the world working differently) coupled with empathy (of understanding the feelings of others being affected by things that are not working).  The third is optimism (the conviction that things can change coupled with the belief that the risk is worth it because it can make a difference). These three things are what enable people to become activists.

At this point in her life, she said that is time to push for the changes envisioned when the 1960s saw the emergence of the second wave of the women’s movement.

The first wave began in the 1848–women’s suffrage. Here in Oregon we are celebrating the 100th anniversary of women’s suffrage, which finally passed in 1912 after a long campaign.

Governor Barbara Roberts introduced Governor Kunin. They are among  the first generation of women governors–the nine women elected between 1974 and 1994.