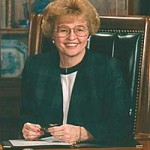 Divorced with two children, she was working full-time when she began her political journey as a citizen lobbyist working to persuade the legislature to provide education for children with disabilities. Her success reinforced her belief that one person can make a difference. Warm and optimistic, she was a liberal Democrat who spoke her mind.

Book Cover: Up the Capitol Steps